Orders currently ship 4-5 bus. days after they're placed Join the MightyFix – Ship Free + $5 off Get the Code
× 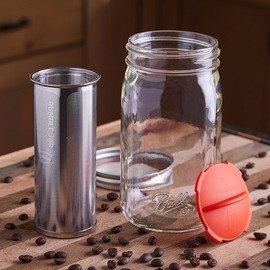 Coffee...we drink a lot of it. That was our "coffee expertise", at least until early 2017 when Karl got fed up with all of the existing cold brew coffee filters out there and started hacking away on some new ideas he came up with to make a better one. Hans remained skeptical. But Karl converted Hans to cold brew through a combination of sorcery and brainwashing (i.e. having him taste it) until Hans capitulated and saw the light...cold brew was better! Both of us are product designers and creators, and while we're pretty good at developing concepts, we're even better at finding folks who have real expertise to make our ideas come to life. We hunted around and linked up with the perfect manufacturing shop that strictly works on coffee devices, and off we went to designing, prototyping and playing with our different ideas. And talking to the cold brew experts...folks that didn't just learn about it yesterday, but have been seriously playing with cold brew for 10+ years, before anyone was really selling it. This group of folks had seen and made it all, so when they said, "Wow this is a really good idea," we knew we were onto something! So in late 2017, we brought Rumble Jar to life on Kickstarter. Rumble Jar's reception was pretty mind-blowing (over $50K raised in 3 weeks)! People were actually getting excited about a fairly simple cold brew coffee filter that didn't even have a single moving part. So if Rumble Jar can make it on Kickstarter, it can make it anywhere! -Hans & Karl