We'll send you an email that you can review, edit and forward from your own email application...

Where should we send the email?

Congratulations to all the wonderful teachers who were nominated, and especially to these fifteen who were randomly selected to win $100 MightyNest Gift Certificates:

The response to the Mighty School Challenge was thrilling, emotional, inspiring, and sometimes overwhelming. What we learned is this: Every school is truly mighty. 15,000 supporters from over 8,000 schools participated, demonstrating support for their schools through comments, photos and votes:

In week 2, we asked supporters to show us how they sent love to school through homemade lunches. We received hundreds of inspirational photos and selected these 5 to win $500 for their schools and $100 MightyNest Gift Certificates for themselves:
Community Winners (most votes)

Congratulations to these three winners of a $1000 donation to their school and $250 of reusable lunch gear for themselves:

During the summer of 2014, 40,000 parents joined us in pledging to "do" lunch and equip their families with reusable lunch gear for their healthy lunches. That's 14 million lunches sent in healthy containers. And since the average kid's school lunch creates 67 pounds of waste per year (based on EPA data), that's millions of pounds of trash saved from the landfill this school year! 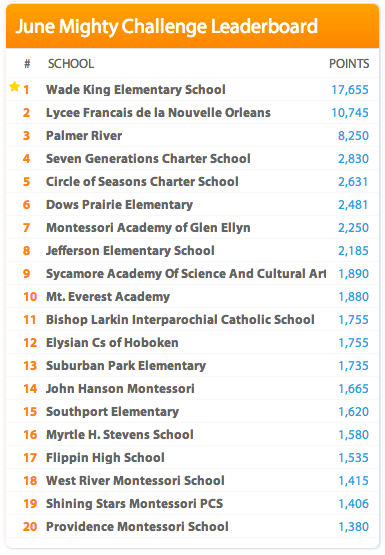 Mighty Schools were out for Summer, but they continued making healthy changes as they Savored the Summer.

Families tried homemade popsicles, pizza on the grill, learned how to select the best eggs, and how to use an entire coconut. Wade King Elementary in Bellingham, WA took home the grand prize.

May 2014 Get Fresh Challenge 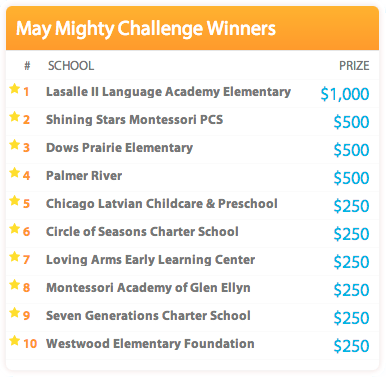 Families swapped out dryer sheets for amazing wool Dryer Balls, and found creative ways to use ice trays, flavor waters, pickle veggies, and cook pizza on the grill. $4,000 in prizes were awarded, and newcomer Lasalle II Language Academy in Chicago, IL took charge by engaging 118 families in their first month as a Mighty School! 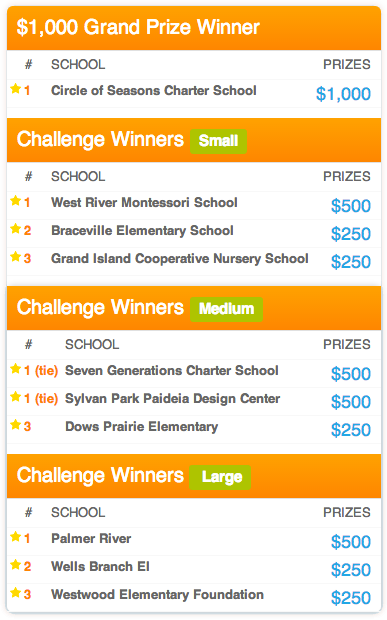 The Earth Day Challenge celebrated mindful ways to support the planet as a family.

Between reducing idling time and cutting out plastic water bottles, families made a tremendous impact on their schools and communities. $4,000 in prizes were awarded to the top 10 schools. Circle of Seasons Charter School in Fogelsville, PA rallied over 100 families to top the charts.

$250 Participation Prizes
(for schools under 100 students earning a minimum of 3,000 points)

My Box My Cart